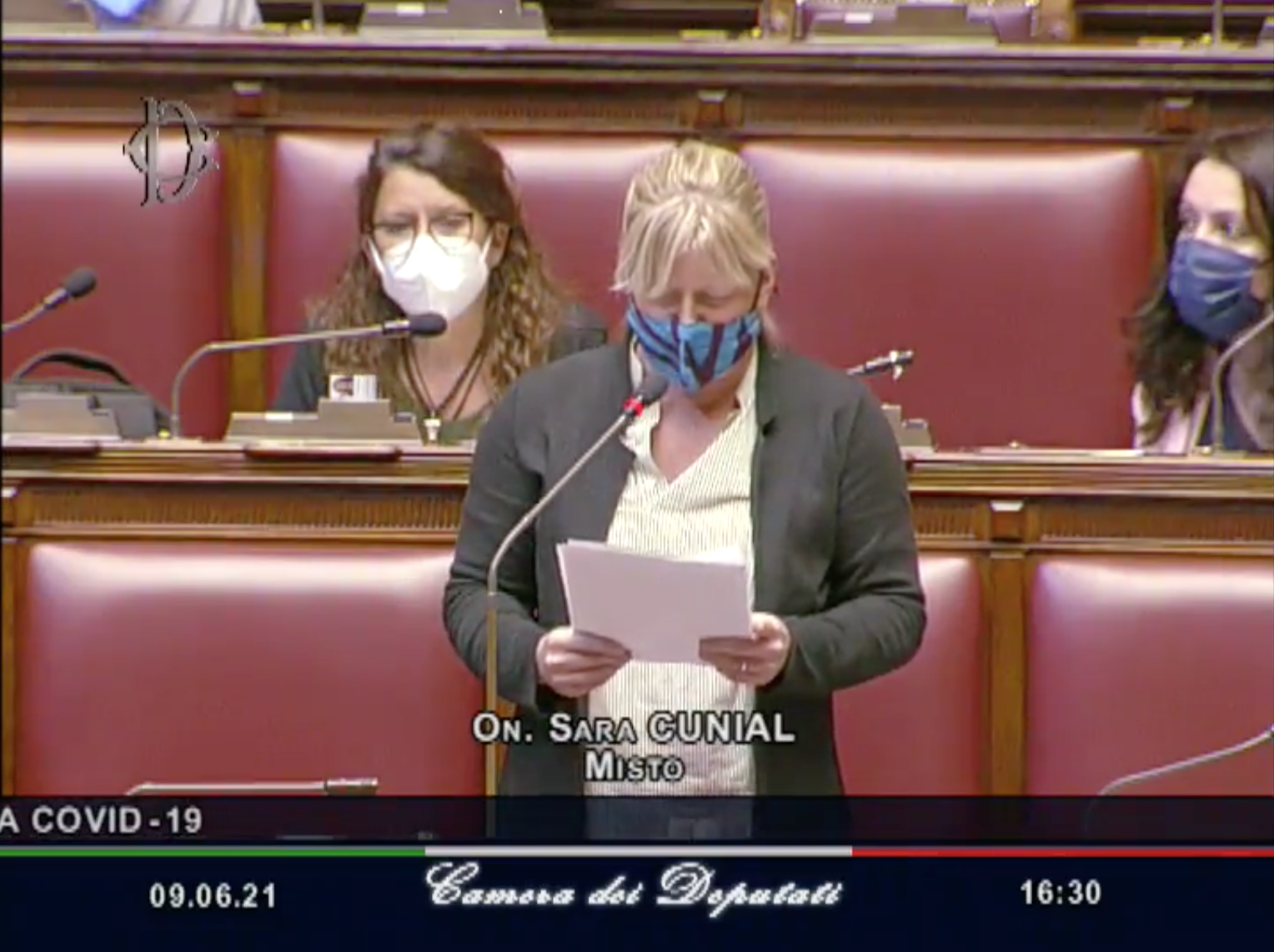 Thank you President. The COVID-19 green certificate introduced by this Decree is anunfair, inefficient, disproportionate obstacle
for the freedom of movement of Italian citizens.
The proposed Article 9 is neither scientifically or legally acceptable because it violates the freedom of movement guaranteed by the Constitution, it discriminates those who do not want to be tested or vaccinated, it does not guarantee the data protection rules.
The certificates are based on rapid or molecular antigenic tests which means on swabs, on the so-called vaccine or if healing occurred.
RT-PCR tests on which swabs are analyzed, according to the inventor Kary Mullis, “Colleagues, colleagues please, excuse me
Cunial, colleagues, colleagues”.
RT-PCR tests on which swabs are analyzed, according to the inventor Kary Mullis, who received the Nobel Prize for Chemistry in 1993 so he is not just a common Minister, they cannot be used for diagnosis. In November 2020 the Swedish Institute of Public health said that PCR tests couldn’t be used to determine the infectivity. In December 2020 also the WHO stated that PCR technology could result in false positives and negatives and therefore they encouraged health workers to take into consideration the diagnosis of the clinical symptoms, which is to say home care visits that you irresponsibly prohibited.
The high value of amplification cycles makes it difficult to distinguish between the background noise and the target virus.
ECDC itself refers to a reliable result only when it’s below 24 amplification cycles, which means
that in the present date tests results in Italy are about 80% unreliable because they are amplified to 30,40 and 50 cycles. The falsity of the epidemiological data resulting from the abuse, from abusive and incorrect use of the PCR test has been ascertained and confirmed from the Administrative Court of Vienna and from the Lisbon Court of Appeal. Rapid Tests are not reliable either.
As shown by the COVID screening campaign “Sardi e Sicuri” that resulted in 800, in 582 positive Antigen Rapid Tests
of which then only 32 were confirmed positive by the molecular test.
About the effectiveness and the efficiency of those that you call vaccines, which are actually gene therapies, relative risk reduction values are known, the official ones are: 95% for Pfizer, 94% for Moderna, 67% for Johnson, 67 %for Astrazeneca and they have already been proven wrong several times. Peter Doshi, the editor of British Medical Journal, had already recalculated the Pfizer value and lately, in the Lancet article “COVID- 19 vaccine efficacy and effectiveness” published on April 19 2021, it has been taken into account the absolute value of the risk reduction on the entire population discovering that Astrazeneca has a risk reduction of the 1.3 % while Moderna and Johnson’s of the 1.2% and Pfizer the 0.84%.
The well known Rockefeller University on February 10, 2021 in the journal Nature with the article “mRNA vaccine-elicited antibodies to SARS-CoV-2 and circulating variants” states that the three major mutations of the virus SARS are probably experimentally linked to COVID-19 vaccinations. Therefore, it’s not possible to detect contagiousness and positivity with accuracy, because tests are not reliable.
It’s not possible to stop the famous spread with vaccines, actually, by modifying the innate immune response in people it gets worse; it’s not possible to reduce the risk of the vaccination. To reach the healing process we need doctors to go back to home-based therapies that you don’t want to be done.
Therefore, it’s clear now that he health emergency management is not about Science. Otherwise we cannot explain why after the confirmation of the link between death and vaccination for the Paternò case, one of the many cases of adverse fatal reaction, the Ministry, AIFA, the CTS and the Italian Institute of Health did not asked for a detailed analysis of these serums.
The Public Prosecutor of Syracuse regarding the Paternò case said that because of the antibody-dependent enhancement (ADE) a healthy person who is protected with natural antibodies would face real risk with the administration of your vaccine. This happened meanwhile the Marche Region is preparing a third dose for everyone and the health management in Emilia Romagna invites health care workers to not prescribe serology testing which they criminally define as “useless”. Many cases of adverse reactions confirm the harmfulness of the protein spike, an actual toxin for our body, as well as the inoculated mRNA technology.

Harmful effects to the detriment of all the citizens are caused by residues of foreign substances that accumulates in our organs: brain, heart, liver, ovaries, testicles and among young people, beside the post vaccine thrombosis and disorders of the circulatory and neurovegetative system, they also lead to dangerous myocarditis and fulminant leukemia.

Vaccinated people can still carry and spread the virus.
COVID-19 vaccines do not prevent the transmission nor the infection; they cannot be a condition for the use of the Green-Pass and this was said by the WHO.
Actually the Covid Pass was also rejected by WHO which therefore considers it a dangerous illusion and also your Privacy Authority whom in the warning measure explains the following criticisms, in addition to the fact that he wasn’t even consulted by you, so it is totally unsuitable to legal basis on which it is based, there is one formal violation of the principle of data minimization, of the principle of accuracy, of transparency, of conservation, integrity and confidentiality.
With my suppressive amendment the attempt was to eradicate this evil that is dazzling,

sorry, afflicting our Republic: that is to say of social control at all costs. Covid Pass was rejected by many states in the world as hey want nothing to do with masks, restrictions and vaccines.
It cannot be attributed to: “Europe wants it”, because there would be opposition on the barricades which is not happening. So I am asking you: “who mandates it?”, “who’s forcing you to implement a tool that recalls the apartheid regime which only purpose is population control and that when someone sneezes will be forced to follow your order and get injected with a vaccine of unknown composition; adverse reactions have already been registered and everyday we have more cases, all of that is leading to people’s death”. I am also asking you “Do you consider morally acceptable

subjecting children to a medical treatment that may cause them harm in order to protect other adults?”.
Furthermore: “Why do I have to get certified while the vaccine you want me to get has no certification at all as it is still in phase of experimentation on Italian guinea pigs?”.

“How many Italians are considered expendable?”.
EMA is telling and updating weekly EU relating data about adverse reactions.
About last June 5 we read that with passive pharmacovigilance for four vaccines 1,354,000 adverse events were registered, 683 thousand of them are considered serious and between these ones there are 14 thousand deaths in Europe.
We know, and we know it from American CDC that the currently used degree of underestimation originates in the previous comparative studies between active and passive surveillance and it is by a factor X100, which means that these data must be multiplied by one hundred to be considered real.
The truth is the following one, if vaccines were safe in the Decree-Law 44 it wouldn’t have been approved a Shield
from Lawsuits for those who vaccinate.

EMA confirmed that the trials of COVID-19 vaccines failed to prevent death or severe illness, not even in the short run,
and WHO recognized that they do not prevent COVID-19 infection nor the spread of the virus to other people; the authorities allow the vaccination against COVID-19 which facilitates the spread of variants;

The Public Prosecutor of Syracuse tells us that the experimental vaccine may exacerbate the disease when vaccinated people contracted or they contract the virus by natural infection, see the case of Paternò; so it is said that the survival of the population to the COVID-19 exceeds 99.8% on global level.

Worldwide death rate of the infection is 0.03% for persons under 70 years of age.
In addition, evidence shows that early treatment with existing drugs reduces hospitalization and mortality by 85%
and 75% ,respectively. The well known home care not willed by you.
Why don’t you set up an active pharmacovigilance system as it was requested on the agenda of the Honorable Baroni. Dear Honorable Lorenzin, what are you afraid of? What have you got to hide from us, poor Italians, now turned into guinea pigs?.
Why don’t you set up a serious quality control for these serums, improperly called vaccines, and for tests?; this quality control should be mandatory and it is actually mandatory for any other injectable and ingestible thing commercially available. Because the eal problem is not what I do say in this room, gentlemen, the problem is what you are not telling us!
The confirmation stays in your threats and in your lies with which you are converting this Parliament into a vulgar market of rights and privileges.
Rights cannot be bought with a swab, a vaccine or a test!
So I’m carrying a message for you from one of the many conscientious healthcare workers that I meet every day: “morality means doing what’s right regardless of what you are told, obedience means doing what you are told to do egardless of what is right!”.
Thank you.